We invite you to read the opinions of our leading athletes who represent Poland in the world arenas.

„There is nothing more important to me after training than proper regeneration. I always took great care in choosing supplementation and taking care of the diet, but for a competitive athlete there is no better ally than a good-quality sleep. Through numerous trips, changes of time zones, often late training) and the abundance of information provided by the technology, I had a big problem with sleep. I had a great difficulty falling asleep, which was frustrating with high training loads – considering such a lot of activity during the day, „I should be tired” and it was, but it was not nothing to do with sleepiness. The consequence was often exhaustion. During the six-day training camp, on the fourth day, there was fatigue, apathy and a lack of appetite which was inadequate to my level of training.
The fewer such moments and the better the regeneration, the better the training and the chance to achieve high sports results.
Being aware of the role of the circadian cycle, I tried to develop good habits that would help me achieve my goal. Unfortunately, with such a fast pace of life, overload of information and everyday use of technology, it is very difficult. Blue Owl Eye glasses came in handy. I have regulated my circadian rhythm, I fall asleep calmly, and most of all it is easier for me to monitor my fatigue, which is appropriate for the work I have done. 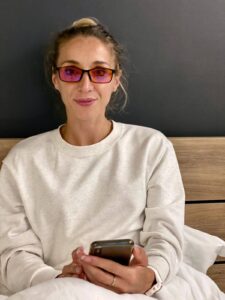 „During many travels, changing places to sleep, I was often troubled with falling asleep and many times I used the help of a melatonin tablet to make me sleep better. During one of the training camps, I was interested in the work of my psychologist Dariusz Nowicki and a completely new gadget, which I would love to test I was not disappointed and … gave up melatonin.
I put my glasses on about 1.5 hours before going to bed and I noticed a significant improvement in sleep quality. Following the measurements of my watch, the deep sleep phase was extended by about 40 minutes! Obviously, these parameters change depending on how intense your training is throughout the day, but … this little thing improved my body’s regenerative capacity.
I’m for yes! ”
„ 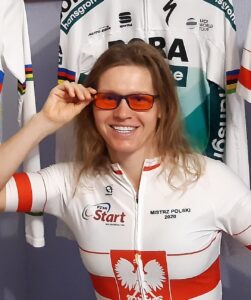 „Due to the fact that I am a huge fan of TV and computer sessions every night and I had big problems with sleeping and falling asleep every night, I became interested in the product, glasses blocking blue and green light emitted from computer screens and TV screens. Mr. Maciej Rybicki and the Foundation Start-Sport – KaaTsu Polska funded me as a 5-time Paralympic medalist to test these light and comfortable glasses.And you know what the GLASSES WORK, after 11 days I extended my sleep from 6 to 8 hours and I had only one sleepless night when I forgot about my glasses and read a book just before 2 hours of sleep (earlier it is 6 to 10 a month on such nights). I look forward to even better results after using glasses for a long time. ”
„

„I put on the glasses about 2-3 hours before going to bed, but after about 20-25 minutes of wearing them I start to yawn. Since I put them on before going to sleep, my sleep is better, my deep sleep statistics have improved significantly, I wake up refreshed and full of energy in the morning. starting my brain was refreshed, regenerated and ready to concentrate during the competition every day. ”
„

„Some time ago I learned from my sports psychologist, Dariusz Nowicki, that if I have difficulty falling asleep, it is worth trying, among others,” magic glasses „.
Glasses that make you sleep, and thus the regeneration of the body in tough preparations for the marathon, will be better. Honestly, I was a bit skeptical at the beginning. However, I made up my mind and bought this gadget
I put my glasses on about 2-3 hours before going to bed and I noticed that falling asleep is much easier and that sleep is much harder and more effective.
I certainly recommend it, because there is nothing better than a good rest for the body! „